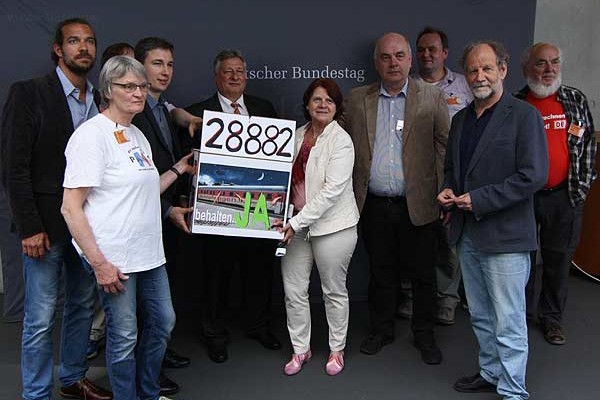 Today 31.5. there was a handover of almost 30.000 signatures from the German petition and a presentation of new printed material about LUNA night trains.

They were two events side by side in Berlin. Martin Burkert (chairman of the German transport committee) and to the petition committee Annette Sawade (SPD) were receiving the signatures. Anette said that representatives will have the chance to meet the committee. Boss of DB Mr. Grube will be guest in about 3 weeks: They broke the promises, and DB will have to tell what they are doing. The group met 10-15 members of the Left Party. In two days that party will pass a motion in the parliament, parliaments will most likely transfer the debate to the committee and that could very well bring up a new hearing.

>> Read about it in Der Tagesspiegel

>> Read about it in Stuttgarter Nachrichten

After that a press conference about the LunaLiner initiative was held. 8-10 journalists showed up. The LunaLiner project of a European Night Train network is meant to be a challenge to DB and other railways: it shows what could be done, if they did their work. Michael Cramer (green chairman of EU transport committee) was at both occasions. He criticized the discrimination of railway transport: trains have to pay toll (»track fees«) on 100 % of the network, only 0,9 % of the road network are toll roads. The German government works with double standards by denying subsidies to night trains and keeping 17 of the 23 international airports alive only with big subsidies.
>> Find more information (in German).

The hard copy will be spread in Germany, and you may use the text and pictures from the pdf in other countries. Read more about the proposal here.

>> See a short outline of the proposal with suggested European network.