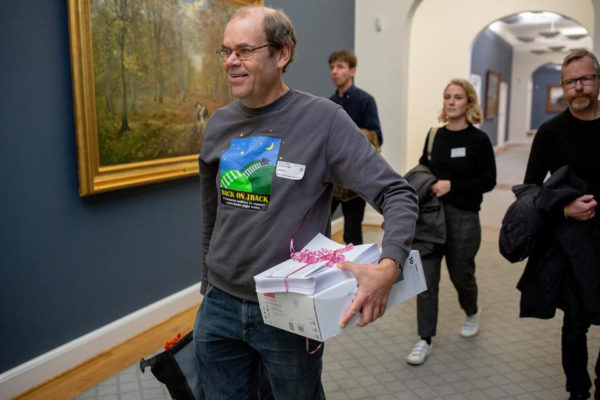 The Back-on-Track organization has today delivered a huge bunch of signatures to the Transport, Building and Housing Committee at the Danish Parliament at Christiansborg Castle.

There must be night train to and from Denmark again.

That is the opinion of the organization Back-On-Track, which has today handed about 42,000 signatures with that demand to the Transport, Building and Housing Committee at Christiansborg.

At the presentation of the many night train supporters, it was Poul Kattler, who represented the organization.

“We want to draw attention to the fact that night train is a climate-friendly alternative to flights at a time when there is great public awareness about it,” says Poul Kattler.

Night trains in Europe have not been easy for the last many years, where an increase in the number of new air routes and cheaper airfares has contributed to a pressure on the train.

The night train route run by City Night Line, which sent Danes to Europe, closed in November 2014. Since then there have been no night offers for those who prefer to use trains than planes. It goes in line with the general downturn for the European night trains. Only the Austrian state railways, ÖBB, are currently looking for a business opportunity with the night trains in our neighborhood, together with a small Swedish company, Snälltåget, who has begun to drive night trains in the summer from Malmö to Berlin with great success. 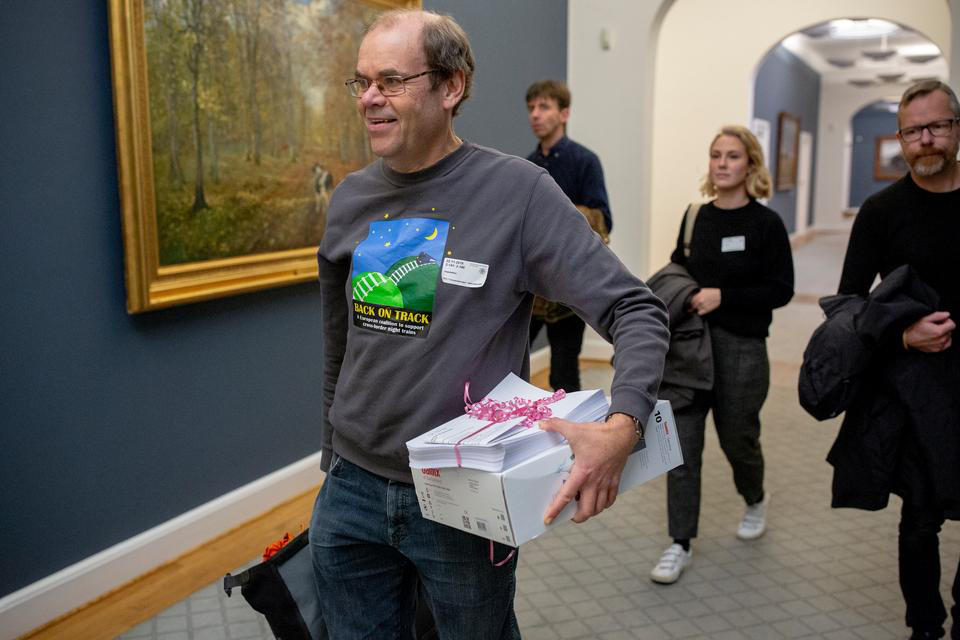 Do not go with DSB alone

If there are Danes who think that night train can be a future product for DSB, they can well believe again, says Commercial Vice President of DSB Aske Wieth-Knudsen.

He can to see the attraction at night trains to Paris or Munich and wish that it was both easy and cheap to launch such services, but:

“It’s very expensive to invest in international train equipment, so we do not see the economy in resuming direct night trains, like what we have previously been involved with. Night train equipment is bound in relatively few departures, and that is not trains we can use many times during the day, such as intercity trains. That’s why it’s relatively expensive and we cannot see that we can create a profit here, “says Aske Wieth-Knudsen.

But it’s not a DSB solo model, as Poul Kattler from Back-on-Track is dreaming about. At the signature ceremony he announced today that an operator like the Austrian state railways ÖBB could be a possible partner in a partnership where ÖBB stands for the cars and DSB stands for locomotives.

“The Danes are an eloquent population that hunger for realistic alternatives to air travel. I have made the committee (Transport, Building and Housing Committee, ed.) aware that there with a little bit of luck will be an operator that might be interested” says Poul Kattler, referring to ÖBB.

Kurt Bauer, head of the long distance train department of the Austrian state railways, ÖBB, has previously told Politiken that ÖBB will only drive a night train to and from Denmark if there is a goodwill from Denmark:

“I do not think that night trains comes to Denmark again unless it’s politically supported. Because there is not immediately much economy in it. And it’s very hard to reintroduce a product on the market once you’ve removed it because you do not know how customers will accept it again” as it just sounded recently.

To that, Aske Wieth-Knudsen answers:

“If there is an operator who can and wants to drive international routes on a commercially viable basis, we would like to be in a dialogue on such cooperation. But it requires that the route does not provide DSB deficits. ”

Instead of night trains, DSB has now chosen to focus their future international efforts in two places. One is the Fehmarnbelt connection – expected to be completed in 2028 – to Hamburg with new locomotives and new wagons expected to be operational in 2022. The other is the stretches in the Øresund region.

At the committee meeting today, among other things, was the Red-Greens Henning Hyllested (Enhedslisten), who was excited to see the many signatures. But it is also clear that there are more unknowns in the requirement for reintroduction of night trains on Danish rails.

“We problematized what they (Back-on-Track, ed.) also know well; who should run such night trains? All talks about Austrian ÖBB, and they are probably exploring the terrain and may at some point come up with a commercial project. I think that is interesting and positive, and we must go for it”, says Henning Hyllested, who thinks it is a project that DSB should connect to.

Now, Henning Hyllested will bring up the night train issue when the Red-Greens meets with the other opposition parties.

Today’s handing over of signatures also makes a “strong impression” on the Liberal’s  transport rapporteur, Kristian Pihl Lorentzen (the government party Venstre), who did not attend the meeting, but is well aware that the 42,000 signatures was handed over.

“When so many people is engaged in it, it is clear that it gives reason to consider night trains an extra time. This does not automatically mean an re-introduction, because there are some financial consequences of it, but I can promise that we are giving an extra consideration.”

Climate: Let’s drop the plane and get into the train

A flight from Copenhagen to Brussels could be done in 1 hour and 40 minutes and cost down to 73 kr. In comparison, a train trip took the same route 12 hours and 43 minutes with 3 shifts along the way and cost 1,604 kr.

Is it strange that we fly like never before, while rail journeys to European countries are getting rarer?

The extreme difference in prices and speed is no natural law. It is also an expression of how we have adapted. Political priorities, rightly so.

The case is that the airline industry is exempted from taxes on fuel and VAT, and the cost of CO2 emissions on the airplane is not part of the ticket price, but is passed on to nature and future generations.

So privileged is the train industry absolutely not. Here there is VAT and taxes and absolutely no politicians do reward the train operations economically although it significantly more climate friendly than the air traffic.

No committed is made to develop fast and efficient train journeys between European cities. On the contrary, we see a wildness of national interests clashing against each other and an absence of political ambitions. The result is fun enough that train trips have become cumbersome, time-consuming and expensive.

It is wonderful that 42,000 signatories via the Back on Track network demanded night trains back in Europe. It is also pleasing that a recent survey in this newspaper recently showed that many Danes would choose train journeys if they were cheaper and faster.

And it is a very healthy sign that a growing proportion of Danes are prepared to pay air taxes, as was apparent from yesterday’s newspaper.

But where are the politicians?

For a variety of reasons, a large majority of Danish politicians are skeptical of air taxes, which have also been implemented in Norway, Sweden and Germany. And neither in Denmark nor in the rest of Europe there is a strong political will to strengthen one of the alternatives, the train. Strangely, there’s nothing happening …

But if we are to fly less – and we have to – and if we still have to travel and meet each other – and we will – both air fares and an offensive investment in fast trains in Europe are indispensable.

It’s getting troublesome and cumbersome, but when do we get started?