Celebration in Berlin and other places: New night train from 9.12.

Back-on-Track has decided that we in cooperation with other train friends will make parties in Berlin, Wroclaw, Frankfurt (Oder) and Vienna in relation to the new night train. Events will take place both Sunday evening and Monday morning.

> Have a look at pictures

Berlin, Sunday 9.12. We are celebrating the first departure of this new night train at the Berlin main station. The new NightJet to Przemysl, Budapest and Vienna. We will meet at 6 p.m. on the middle level (street level) of the main station, in the middle of the building on the platform between the escalators. Members of passenger associations and MEP Michael Cramer, former chairman of the Transport Committee of the European Parliament, will be present. The train departs at 18:40 from track 11 (upper level) and will be sent on its journey by us.

As we know, to greet special trains and tour groups it is quite common and is not suppressed by the DB. That includes banners and loud voices!

After the departure social gathering may take place at coffee- or beer bars at the station.

Berlin, Monday 10.12. “Bahn für alle” has registered an action with rally from 8:30 a.m. to 10:00 a.m. at the same place: middle level (street level) of the main station in the middle of the building on the platform between the escalators.

At 9:16 a.m. the night train is expected to arrive on track 14, on board are Lars Igeland, member of “Back on Track” and participant of the climate summit in Katowice, as well as Iwona Budych, spokeswoman of the German-Polish rail transport initiative KolejDEPL. In addition to these two, representatives of passenger associations, the Stay Grounded network and Matthias Gastel, Member of the Bundestag, are expected. After arrival we will return to the middle level to listen to short speaks. 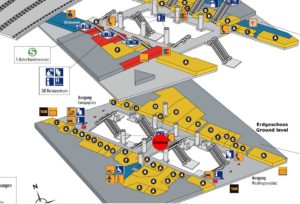 The hope to meet German press to the event Monday morning.

In Wroclaw there will be two events on the platform: on Sunday, 9.12. with the first arrival from Berlin (10:55 p.m.), and on Monday, 10.12. around 5 a.m. with the first departure to Berlin, presumably with live stream on the Internet.

In Vienna at the first departure of the section to Berlin (on the night train to Warszawa) on Sunday, 9.12. We meet at 21.30 on the platform. The departure is 22:10, and it will be “greeted with joy”; night dress and banners.

In Frankfurt (Oder) will the first departing train 19.45 be met by town officials  Claus Junghanns and Jörg Gleisenstein who will distribute treats to travellers and the crowd. The arriving train will be welcomed on Monday, December 10 at 8:12 a.m. on the platform. Just drop by!

About the author Poul